Home › Press › Gulley in the news!

Gulley in the news!

Nick Posted on January 9, 2014 Posted in Press No Comments

We made the news three times!

We were in the Winston-Salem Journal.  Reporter and writer Cindy Hodnett gave us a little shout out in here Scene & Heard article. 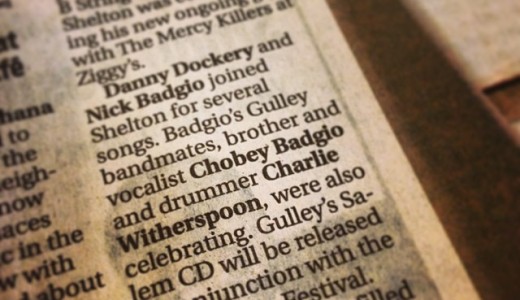 Later, our good friend Shana Whitehead was interviewed by WFDD’s David Ford and Triad Arts.  Shana is the owner of the Muddy Creek Cafe.  We love playing there, we love the food, we really love the people and we love how the Cafe is really become a place were people come to listen to good music.  The entire segment is a little more than four minutes, so we suggest you listen to all of it, but if you are short on time, we are mentioned around the 3:02 mark.  Click HERE for the interview.

Finally, Liz May (yes, the same Liz May who engineered, produced and mixed our album Salem) was on the Camel City Dispatch News Hour promoting the Triad Music Festival.  Since we are also releasing our album at her festival, she made sure to mention it!
Around the 56:30 mark Liz May enters the broadcast!
CLICK TO LISTEN!

This site uses Akismet to reduce spam. Learn how your comment data is processed.

No shows booked at the moment.

Sign up for our email newsletter to receive periodic news, show announcements and other big doings from Winston-Salem's rockin-est hot band!

Why? Because we love you, and we want to see you at our shows! This is the best way for us to let you know about them!